Our Director of Operations, Bob Horrell, recently worked with Steve DePalma, an Army veteran who returned from Iraq and Afghanistan with PTSD and traumatic brain injury. Steve also started his own nonprofit organization, the Veteran Barn Door Project, to help veterans cope with PTSD through therapeutic horseback riding.

Since Steve travels around the country to different ranches for his organization, Bob knew that Steve needed a dog that would be comfortable with travel and new environments, especially ranches. The perfect match would also need to feel at ease around ranch animals, like goats, horses, cattle and ranch dogs, and have great recall, responding to a whistle or call from far away.

After searching through hundreds of dogs at various shelters, Bob finally found Mia, a two-year old female Belgian Malinois, at the Castaic shelter. This breed often works with police and military and are not usually known for being good companion animals. However, Steve had worked with these dogs in the past and was fond of them.

In November, Mia was done with her training and ready to be paired with Steve. However, this pairing was a bit unique because Bob got to spend an entire week with the two while Steve hosted a Barn Door Project camp at Bob’s ranch. By their third night together, Mia was already sleeping by Steve’s side. She even woke him up from bad dreams a few times during the night.

MAP believes in the healing power of the human-animal bond and we will be working with this organization in the future to help our veterans. If you’d like to learn more about the Barn Door Project, visit www.veteranbarndoor.com.

Allen was matched with Jetstar.  Jetstar, a Lab/German Shepherd mix, was adopted from the Lancaster Animal Care Center, one of six centers operated by the Los Angeles County Department of Animal Care and Control.

“I was looking for a companion, a dog who could go on walks with me to help me lose weight,” said Allen. “While it’s a lengthy process to get a emotional support dog because of all the training and protocol involved, I would definitely recommend it to other veterans out there who may be in need. Having a dog — another living creature who helps me focus on today — is very important because Jetstar has needs, it forces me to live in the now and keeps me in touch with reality.”

The match process can take one to three months, depending on the veteran’s needs and the dog. Once the application is received, it is thoroughly reviewed by the the Director of Operations and approval is sought from the veteran’s therapist to ensure he or she is ready to care for a pet. The trainer then meets with the veteran to assess his or her needs and pet preferences. Upon completion of that step, the trainer searches shelters and pet rescues to find the right breed, size, temperament and behavior that would be best suited for the veteran. “This part of the process can take a lot of time,” explained Bob Horrell, the trainer who matched Allen and Jetstar. “We try to ensure we aren’t picking a pet that has any existing behavioral, aggression or anxiety issues that need correcting before the training can commence.”

All out of pocket costs from adoption fees, veterinary care, licensing, microchipping, spay/neuter is paid for by MAP. In addition, MAP provides the veteran a Product Welcome Kit that includes everything from a collar/leash to a bed, crate, toys, treats and grooming items with a value of nearly $500. 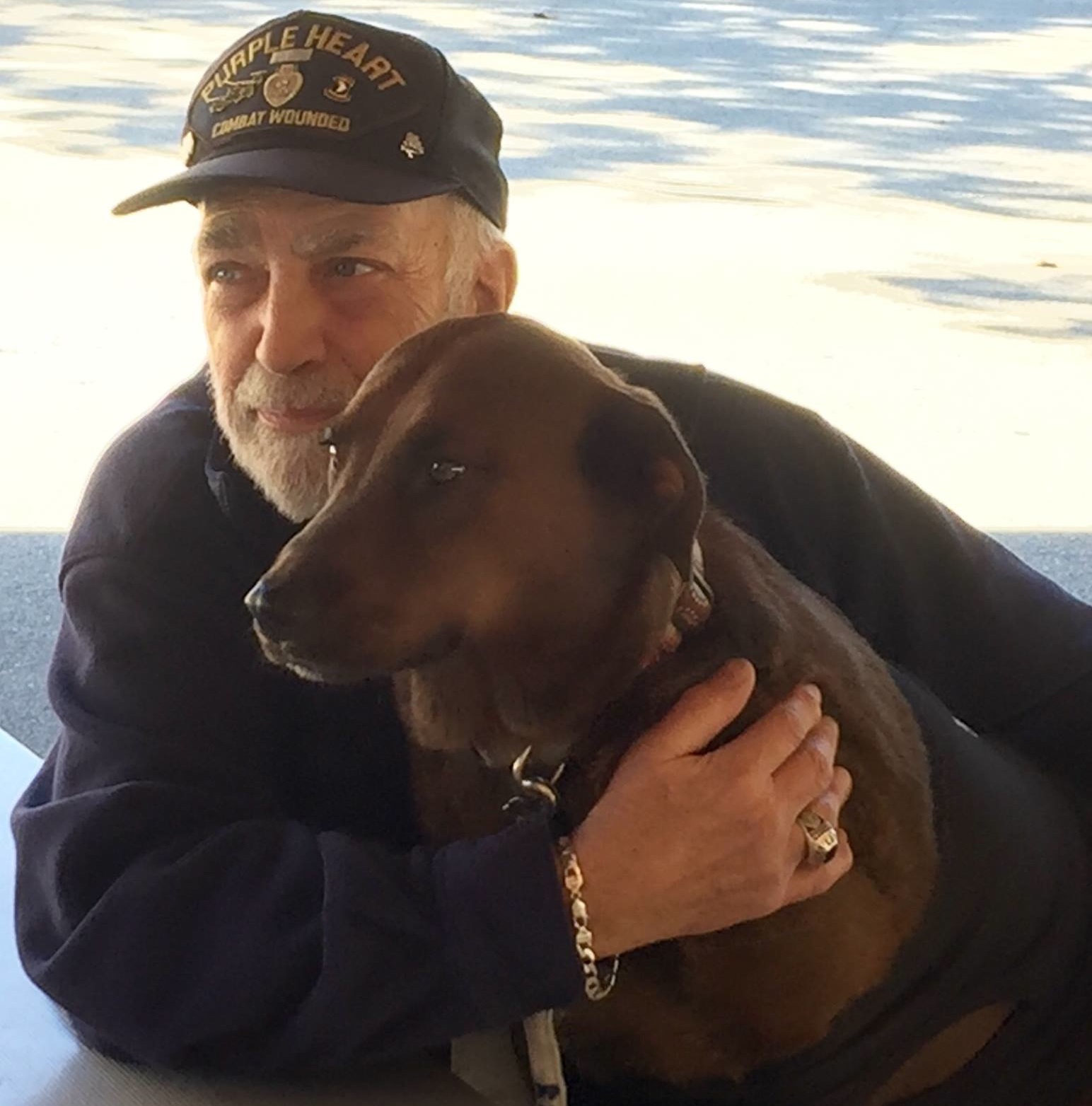 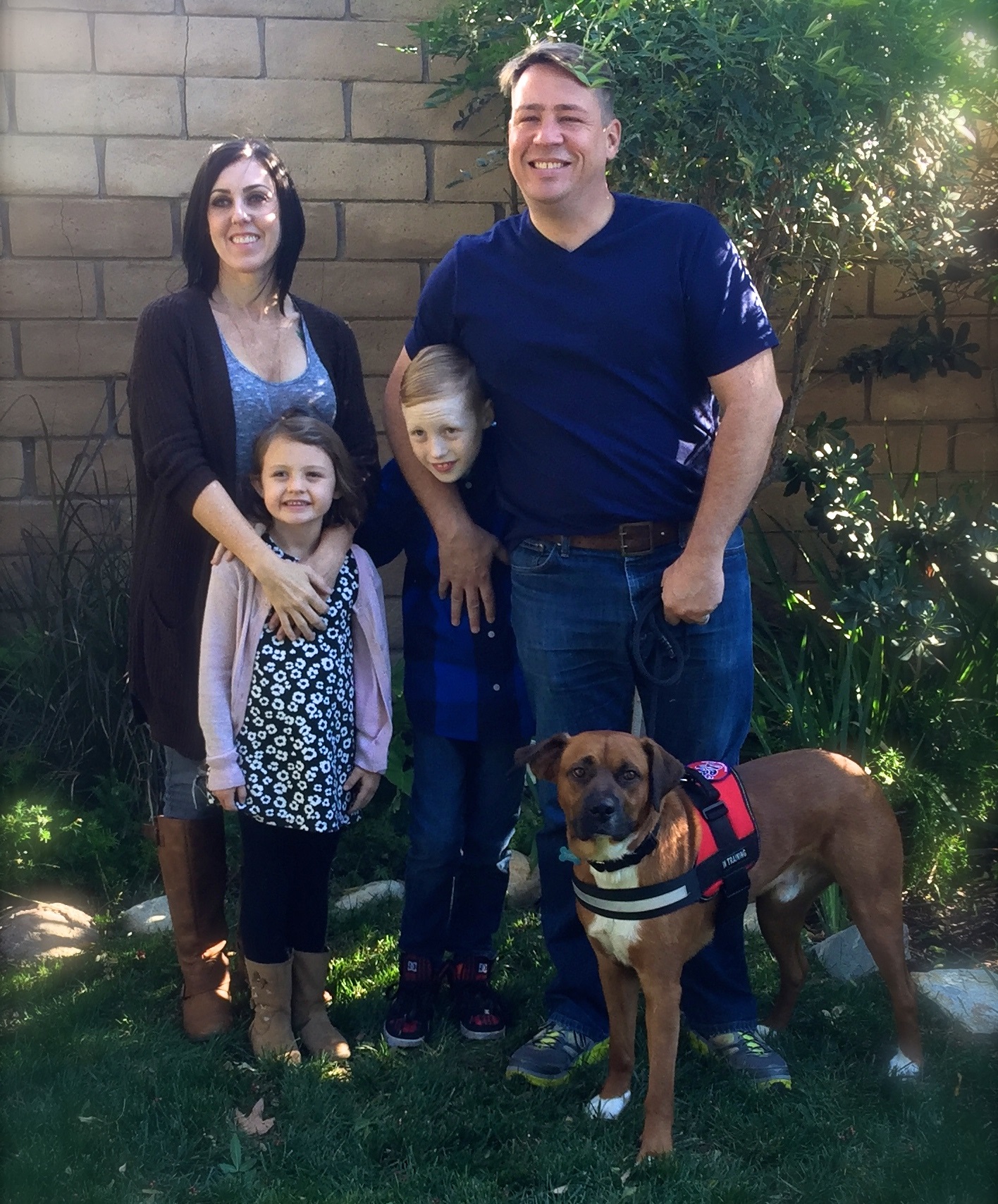 In December dog trainer, Kerstin Hicks, “had the most rewarding feeling of accomplishment ever” when she matched Thor, a boxer mix, with veteran Chris Stagner. “To see him melt right into Chris’s arms …words just can’t express the feeling of happiness it brought to my heart,” explained Kerstin.

Chris served in the Air Force for 20 ½ years and retired as a master sergeant in the public affairs career field. He then spent one year working for the Air Force as a civilian after he retired and is now a full time student pursuing a BA in English in order to become a high school teacher. Chris’ situation presented a few considerations in the training process. In addition to traditional match training, such as positive reinforcement techniques to teach Thor good manners and behaviors needed to help with PTSD, we needed to get him comfortable being around children, as Chris had two young children in the house and one of them was autistic.

At first, Thor, who is approximately 2 years old and was pulled from the Simi Valley Shelter, was a little fearful and unsure, but Kerstin desensitized him by visiting playgrounds and parks daily for two weeks and then slowly worked their way up to being in close proximity with kids.

During his training, Thor visited more than 125 different places (stores, restaurants, schools, public events, etc) and Thor met more than 250 different people and had at least 50 dog-to-dog interactions. Today, he loves his kids and Thor goes everywhere with them. Thor has also made a special connection with Nathan and has even gone to school with him a few times. Chris also plans to take Thor to school with him and Kerstin has been working with the two of them post-match on how best to navigate the campus and interaction with other students.

“I can’t say enough about the support provided to our family and what a great program this is,” Chris remarked. “The extra effort Kerstin put in is a prime example of why this program is so very important. They could give a vet a trained dog and call it a day as mission accomplished, but the trainers are vested emotionally with the vets and the dogs and do everything they can to ensure the best fit possible. Not only has Thor become a companion to me, but he has also bonded with our autistic son. I never expected him to react to a pet in the fashion he has, but the love he has for Thor is genuine.”

We couldn’t do our work without the dedicated support of our dog trainers, who volunteer their time for the benefit of others. One of our trainers, Cara Callaway, recently worked with Aaron Mallary, a Marine Corp veteran, to find the perfect fit for his family.

After some searching, she found an ideal match–a black two-year old retriever mix named Rubi. “When I was searching for Aaron’s match, I knew I needed a dog that would fit well with his busy family, which included a teen, a toddler, a small dog, and two cats. I also wanted a dog who had a calming temperament as that is a key necessity for someone suffering from PTSD,” Cara explained. “When I first saw Rubi at an adoption event, there was chaos going on all around her, but she connected with me right away, put her head on my lap and ignored all the other activity going on around her.

At that moment, I realized I found the perfect pet. Rubi was very easy to train actually, only taking approximately eight weeks.” 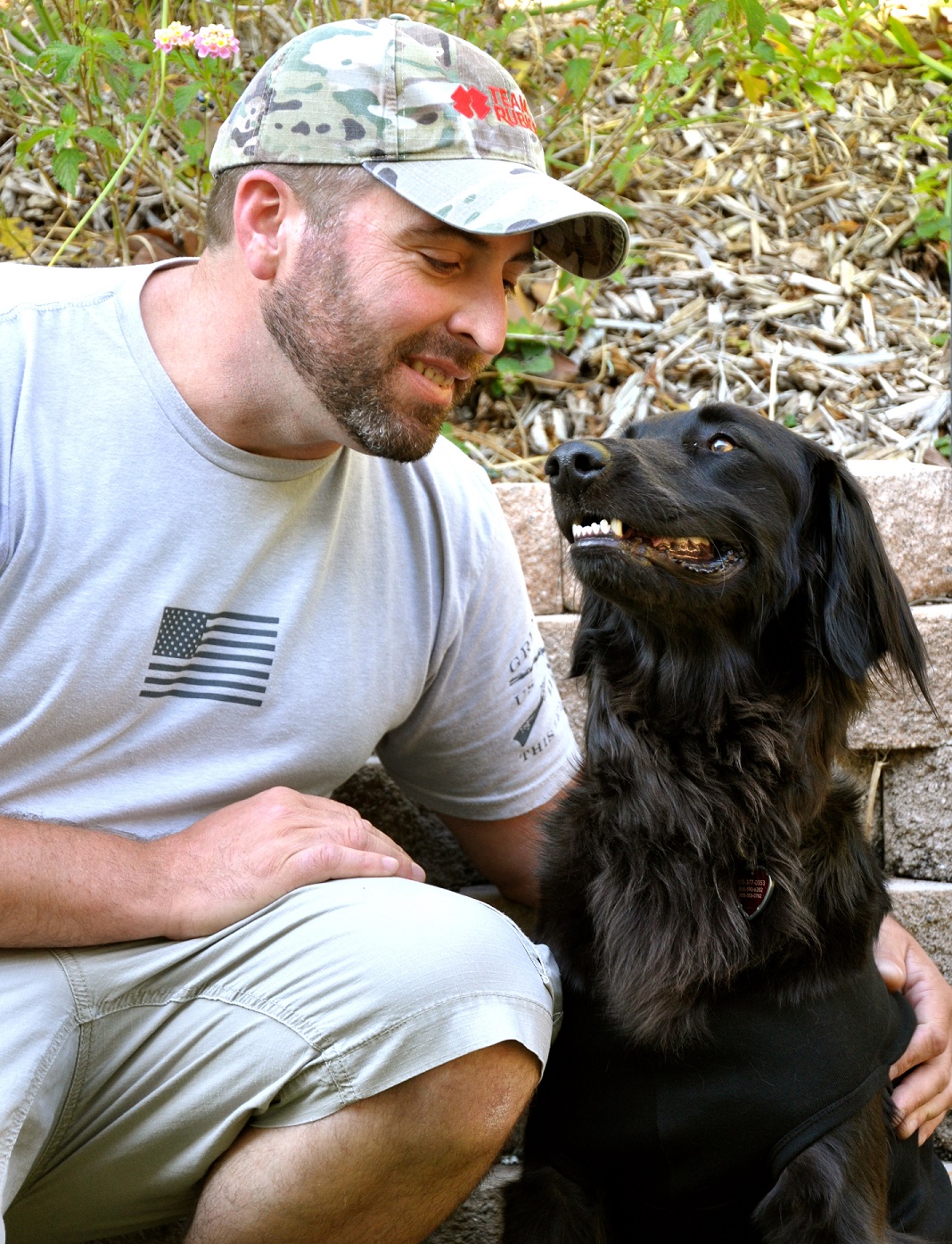 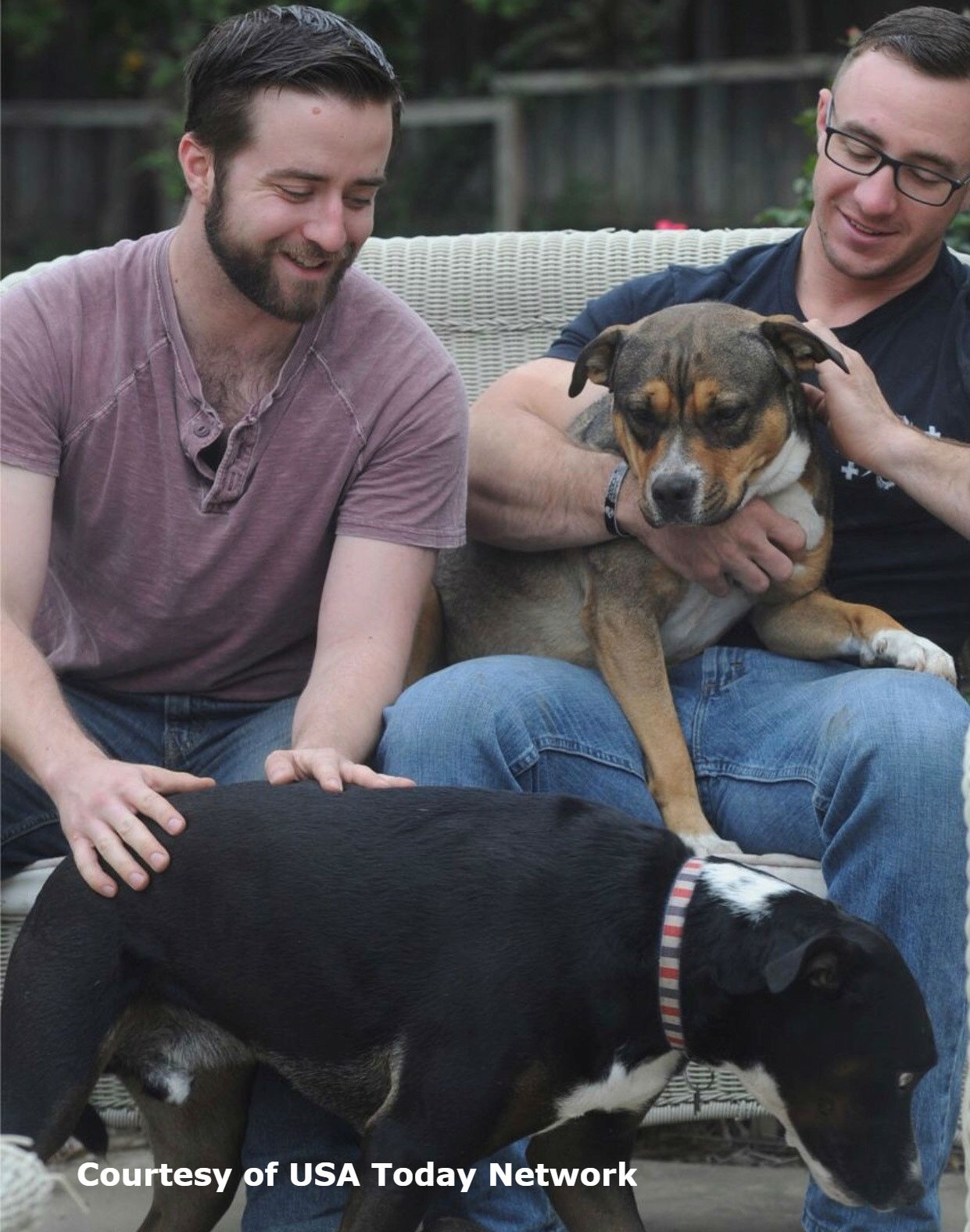 Lamme and his 2-year-old Lab mix live in Simi Valley with Brian Olex, also a Marine reservist, and his 3-year-old pit bull cattle dog Kaia, along with another roommate and a cat. Both Lamme and Olex received dogs last September from the Ventura County chapter of Pets for Vets, now called the Military Animal Project. The organization rescues dogs from shelters and trains them to help veterans, reservists and even active-duty members of the military if they can prove they won’t deploy for 12 months. A fundraiser for the group is set for Thursday. In 2012, the two Marines served in the 3rd ANGLICO unit, an Air Naval Gunfire Liaison Company. They were deployed to Afghanistan at different times and reconnected at Olex’s birthday and welcome home party in 2016. They decided to become roommates last year. Lamme, a pre-med student, learned about Pets for Vets from Olex, 25, an exercise science major at California Lutheran University. Olex had spotted the organization at a college fair on the Moorpark College campus while he was taking an extra credit class. Bob Horrell, the director of training for Military Animal Project and a veteran himself, was there with a dog in training. Olex recalls that as soon as he encountered Horrell and the dog, he felt his tension dissipate. He signed up for a dog on the spot.  “I would get inside my own head, and I knew I needed something to keep my mind busy all the time,” Olex said. Then he told Lamme about the organization.  Lamme remembered how calming a dog overseas was, among all the turmoil there. “While everything was blowing up around us and everything was going to hell, there was still this loyal, loving dog that didn’t really care or judge you for the things you had done,” Lamme said. Olex got together with trainers Laurette Chapman and Horrell and explained he needed a dog that would enjoy hikes, trail running and fishing, as well as just relaxing at home. He had returned stateside with great difficulty being alone. The trainers found Kaia first, then Duke. Horrell said he knew Duke had the temperament to help Lamme with his nightmares. Chapman said Kaia was spry and active, fitting Olex’s needs. Chapman said it takes six to eight weeks on average to train the shelter dogs. This situation was unique in that the two dogs had to train together, given that they would be living together. Chapman and Horrell got together once a week with the dogs. “Typically, the vets do not meet the dog until we are ready to turn them over,” Chapman explained. “With Brian and Kevin, it was different because I had to work with Bob to make sure everyone would get along. They actually did meet the dogs before the turnover because of that scenario. And because of another roommate and cat, we had to make sure all things were covered.” To help with bonding, the vets are instructed to wear a T-shirt throughout the day, sleep in it, then mail it to the trainers. “The last two weeks you put it in the bed at night so when the dog meets the veteran, it’s, ‘Oh, I know you,’” Horrell explained. “They recognize their scent, and it immediately helps with the bonding.” Olex said the connection with Kaia was not immediate, but he felt they were a lot alike. “Meeting people for the first time I’m reserved and very quiet,” Olex admitted. “I’m learning and listening. That’s how Kaia was. The dogs were already playing in the backyard and I got off work. She was like, ‘Who’s this guy?’ She would come over, walk away and her eyes were studying me and trying to learn me. It was really cool.”  The turning point for them was when he put Kaia in the bed of his truck to go on a hunting trip and she put her paws on his shoulders and pulled him in for a hug. “In that instant, the relationship took a turn,” Olex said. Chapman believes the organization saves lives — of both the dog and the combat veteran. Horrell echoed that. “We make a lifetime match for the dog and the veteran,” Horrell said. “If something happens to the veteran, we’ll take the dog back. If something happens to the dog — say he gets cancer — we’ll get the veteran another dog if they want it. We stay involved. For Olex especially, the dog has been a vital addition to his life. “Every day I get up, Kaia gives me a purpose,” Olex said. 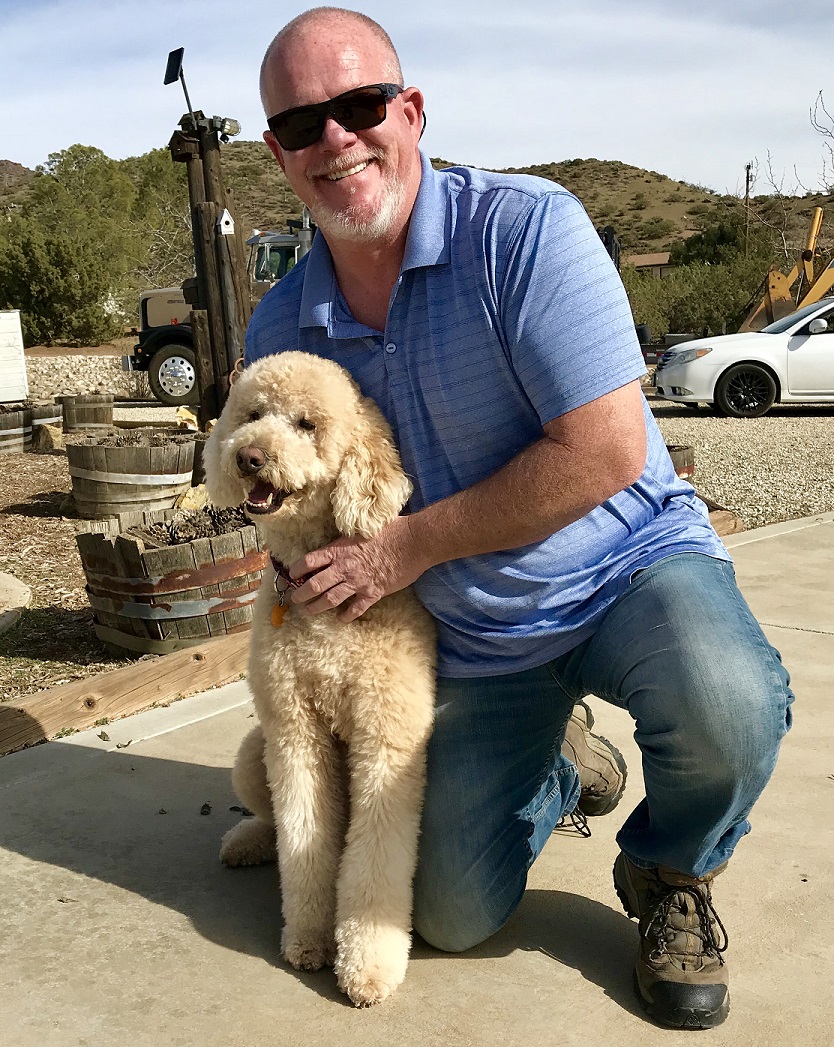 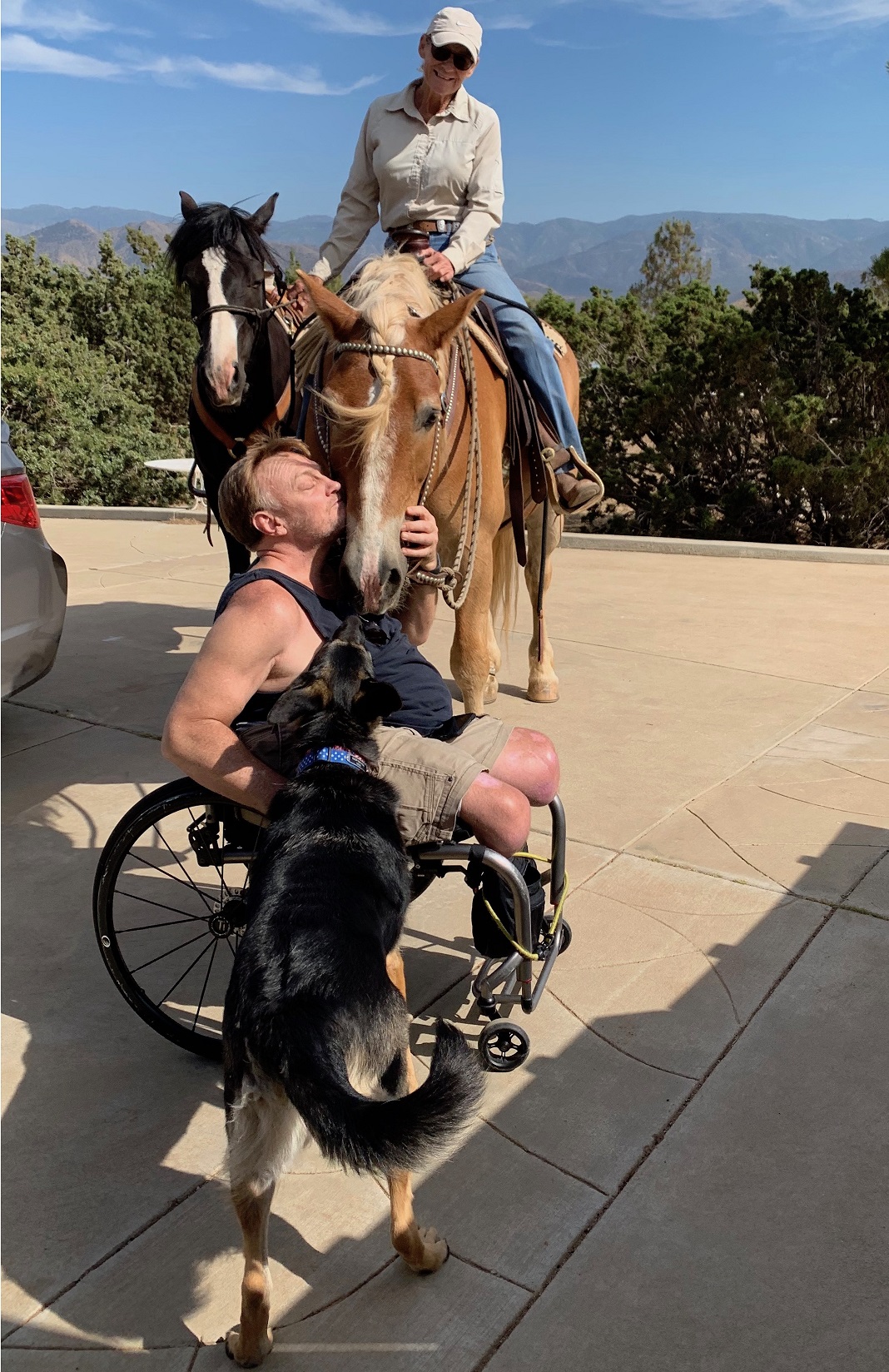 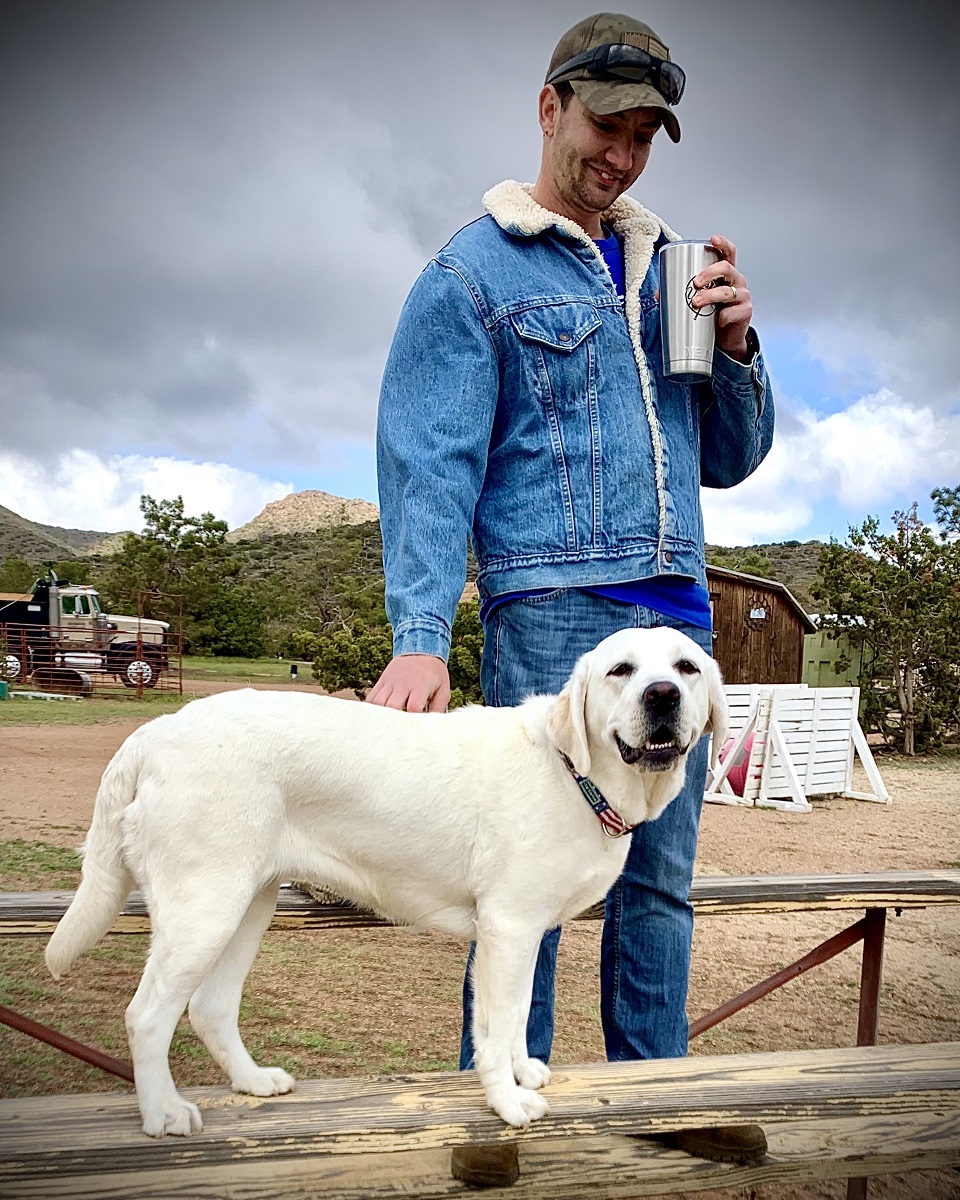